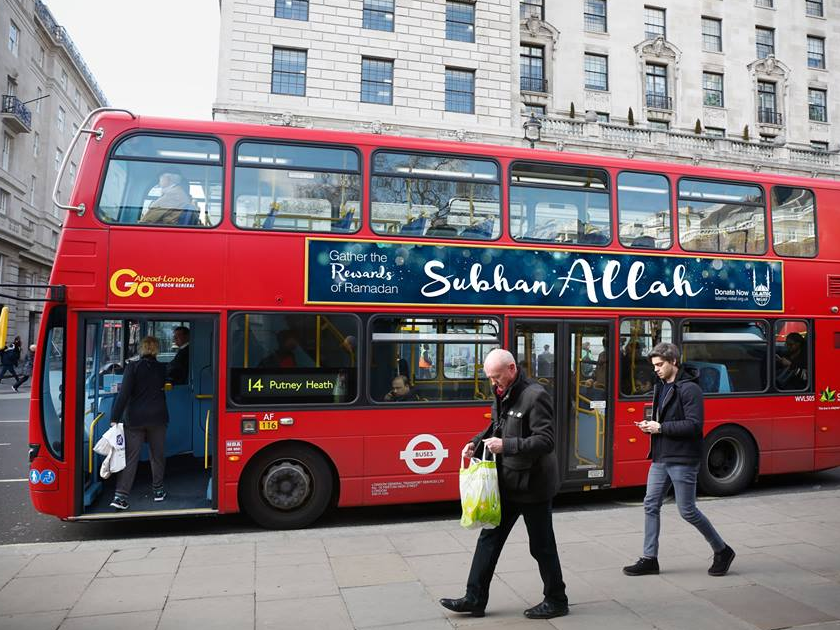 Britain’s largest Islamic charity says it wants to “break down barriers” and portray Islam positively by launching a new advertising campaign which will slap the phrase “glory to Allah” on the side of London buses.

The new campaign by Islamic Relief is, ostensibly, targeted at raising donations for their Ramadan aid to Syria, but is attracting attention for the “hundreds” of buses which will be decorated with the phrase “Subhan’Allah”, or ‘Glory to Allah’.

Muslims reading the advert are told that to “gather the rewards of Ramadan”, they must to donate to Islamic Relief, an organisation which had its accounts with banking giant HSBC closed after “concerns that cash for aid could end up with terrorist groups abroad”.

Public transport has been chosen for the Islamic re-branding in London, Manchester, Leicester, Birmingham, and Bradford – all UK locations with high and growing Muslim populations, reports the Sunday Times.

That the announcement of the new campaign came the day after London crowned its first Muslim leader, Mayor Sadiq Khan. Islamic Relief called it a “nice irony” that the two events coincided.

Imran Madden, a British convert to Islam and director of Islamic Relief’s United Kingdom Branch said: “There is a lot of negativity around Muslims at the moment involving things such as counterterrorism issues.

“We want to change for the better the perception of Islam. The bus campaign is about breaking down barriers and challenging misconceptions”.

Mr. Madden, a former geography teacher, said he hoped the posters would help start a “conversation” in Britain but made no reference to the evidently supremacist nature of the phrase “Glory to Allah” – often mistranslated as “Glory to God” by Western media outlets, in the same tradition as “Allah hu Akbar”, which rather than meaning “God is Great” actually means “[Our] God (Allah) is greater [than yours]”.

And while the Times omits the background of Islamic Relief in their reporting, they do admit the posters may “raise eyebrows” among Christians in Britain.

A major 2008 controversy was the purchasing tens of thousands of pounds worth of advertising space on the sides of London buses to promote the message “there is probably no God”.

Rejecting the message, the Russian Orthodox Church booked bus adverts in London in response, declaring “There IS a God, BELIEVE. Don’t worry and enjoy your life”, reported the Guardian at the time.

Other Christian groups have fared less well with London buses. Then-mayor Boris Johnson stepped in to ban a message by a Christian group in response to a pro-gay advertising campaign. After Stonewall told Londoners “Some People are gay. Get Over It!” Core Issues Trust, a group which promotes the curing of homosexuals sought to write on the side of buses: “Not gay, ex-gay, post-gay and Proud. Get over it”.

The decision was challenged, but not ultimately found to be unlawful, although Mr. Johnson was accused of having made the move to win over gay voters to the Conservatives.

Breitbart London reported in November on a snubbed campaign launched by the Church of England, which featured the Lord’s Prayer. England’s state church had sought to screen the 60-second slot, which featured  a farmer, a weightlifter, gospel singers, children, and the Archbishop of Canterbury praying before the new Star Wars film but were banned by cinemas.

Although it was passed for publication by the British Board of Film Classification and the Cinema Advertising Authority, it was blocked by the Digital Cinema Media (DCM) agency which controls advertising for Britain’s biggest cinema chains including Odeon, Vue and Cineworld. The company claimed they didn’t want to offend non-Christians.

The Church of England called the decision “chilling in terms of free speech”.

Listen to the discussion of this article on Breitbart News Daily on SiriusXM: